In our last post, we harnessed the power of PCA even further to look at different ways to break up the PCA bi-plot. With ggbiplot’s “ellipse” argument, we were able to check out where different players lie on the plot. To review, my 3 main questions were:

Some of these questions may answer the others, but I’d say all 3 are worth consideration and I’d hope to answer by the end of this post.

In an idea world, I’d see distinct clusters… something like this

Then I can be like “OH MY GOD IT ALL MAKES SENSE THERE ARE MY SCORERS AND THERE ARE MY BRUTE FORCE DEFENDERS AND THERE ARE MY LUNCH PAIL BIG MEN GRABBING ALL THE OFFENSIVE BOARDS” and life would be just dandy. However, basketball is more complex than that and I guess humans have the ability to score AND rebound. Man who woulda thunk it. In fact, rebounding can even LEAD TO scoring! No way!! We kinda saw this with the placement of Shaq’s data points on the last post right?

As a big of a reminder, let’s generate our general plot again based on our base metrics (not advanced metrics).

I think the best way to slice this up is to break up our plot into 9 distinct sections, 8 of them being more outliers based and 1 of them smack dab in the middle. This is what I mean: 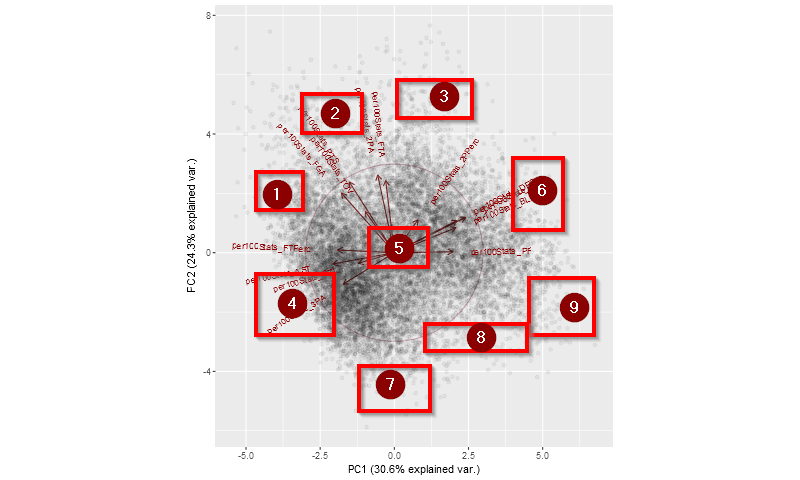 Perfect, in each cluster region, we only see a few players with the exception of region 5, which is the one right in the middle, where we see many more players in the same space because this is where many more players are concentrated.

Alrighty, Region 1. All these regions, again, are pretty elite with only ~30-40ish players per region. Region 1 in particular has 50, which is on the higher side for sure! Looking through the names, a lot of HOFers in there (Isiah, AI, Magic, GP, Reggie…). Many of these guys regarded as both masters of scoring and passing.

That really does look like AI’s stat lines all the time. Isiah preceded me a bit but he appears in this region 7 times, the most of anyone, so I can only assume he was beasting his whole career.

Monta shows up in this region multiple times, and so does Lou Will lol. Wtf? I suppose this is what makes Lou Will 6man… This guy usually comes off the bench and is pretty much averaging per 100 the same calibre of stats that AI was averaging. Now, there’s something to be said about AI doing this 45 minutes a night vs Lou Will who I assume would maybe play 30 minutes or so per game, but still to be doing that off the bench, that’s what I call PRODUCTION.

Some interesting newbies in here, CJ McCollum, Devin Booker, Dame Dolla, Isaiah… fits quite well with the names we’d be hearing these days. Devin Booker tho… how old is this guy? Sheesh.

Region 2… These guys are scorers in every sense of the word, and in fact, to go one deeper, shooters.

Averaging the most points per 100 possessions out of any region of the chart, these guys have a combined statline of 37 / 9 / 6 on PTS / TRB / AST on the most attempts of any region as well, 27 FGA and 11 FTA. By that math, these guys basically take 1/3 of their team’s shots whenever they’re on the floor.

Some of the usual suspects are here in terms of greatest scorers of all time. Lebron (11 times!!!!!), Melo, Wade (2003 draft class anyone?), Dirk, KD, PP, Tracy, Kobe, and… DeMar??? Yeah, he’s probably reached that level this season lol.

A lot of legends that I can’t necessarily speak to but definitely hear about, Nique, MJ, Adrian Dantley, Bernard King, Iceman, Alex English, Karl Malone, and some guy named… World B. Free?? Looks like this is a real guy and made the all-star team once.

I guess, to me, this group is your ice cold scorers. I’d think Kobe would be in here more, but honestly Kobe might even be beyond this box I’ve outlined.

Tim Duncan, Patrick Ewing, Hakeem, David Robinson, Yao, Amare, Shaq. ELITE. I think we see a lot of your “traditional” big men in here because this side of the plot values rebounds, blocks, generally higher FG%.

These guys collectively averaged a whopping 32 / 16 / 3 on PTS / TRB / BLK while shooting better than a coin flip at 53% on 2PA. Look at that rebounding though… The rebound rate of these guys are probably nuts.

This is kind of a weird group. Or perhaps it just seems weird to me on the surface. If I’d have to give this group a name… I guess it would be something like… good dependable point guard? In general, these guys seem to be starting point guards (back up in some cases), some all stars, some non all stars. But I guess the point here is that they were all quite efficient while they were on the floor raking up a 20 / 10 / 2 on PTS / AST / STL statline. Shooting well, shooting lots of 3’s as well.

I guess it’s just kind of weird looking at this seeing Jose Calderon on here a bunch of times. I think these were in his Toronto years too. I remember watching Jose play back when I didn’t know anything, didn’t think much of it probably because he was an international player without much flash and the team was pretty bad during those years anyways, but this, I guess, sheds some light on just how efficient he was and perhaps that’s how we even made it into the playoffs (along with Bosh of course).

It just seems like a relatively unreliable correlation in this group because you got guards like Rafer Alston who is in the same group has Chauncey Billups, but we also have to keep in mind that these were perhaps Rafer’s BEST years and Chauncey’s average years. Also, Earl Boykins in here with Spudd Webb makes you think about just how good they were for their natural gifts.

This entire 4-5-6 region are your 20 point / 100 possession scorers. These mostly seem like non-all star starters in a wing type of role. I could maybe make the assumption that they were pretty decent on defense as 1v1 defenders within their position and even on switch defenses, and saw a decent amount of playing time because of their 2-way ability. You see a lot of 2-way players here like Tony Allen, Shawn Marion, Sheed, Tayshaun, Thaddeus, Wilson Chandler who could, but never consistently lit up the scoreboard but seemingly were still efficient in their play and managed to gather 20 / 9 / 4 on AST / REB / AST per 100 possessions. I can’t tell much more about defense without looking at advanced metrics although these guys did get 1.7 / 0.8 on STL / BLK as well.

These guys had a line of 18 / 17 / 4 on PTS / TRB / BLK shooting the rock at 55% on 2PA. Christ. They basically rebounded as much as they scored the entire time. Add in a bunch of blocks for insult to injury as well.

It seems to be that these guys are essentially the region 3 guys without as much scoring. Still dependable, but perhaps not as gifted like the Shaq’s and Yao’s of the world. The most frequent offenders here are Deandre and Dikembe. None (I believe) were known for their ability to dominate from a scoring perspective, but rather their defense were stellar while still being able to generate points in the right situation, perhaps with a good point guard.

At the end of the day, these guys are great rebounders, get a lot of blocks, and can put up the few points you need them to put up per game.

Just by being in this corner of the plot, if you look at it, implies that you are

I feel like your Region 8 guys are probably your worst guys given our constraints of the player must have played at least 10 minutes per game and at least 20 games on the season. If you’re getting those kind of minutes, you’re probably doing something right. You must have something to offer. Defense. Length. Rebounding. Intensity. The ability to just not turn it over when all the stars are on the bench and you are on the floor. Maybe your team is just… short of players or trying to tank cough develop their young players.

An interesting one here is Bruce Bowen, who was a key piece of those spurs teams and prolifically known for not being a stats guy. Other names here, though, Jason Collins, Quinton Ross, Eduardo Najera, Jared Jeffries, all really not known for making too much of an impact in games other than really just not being a liability.

Final region… Phew… This, along with Region 7 (spot up 3 guys) are probably the most interesting of the bunch.

These guys look like they’re basically incapable of scoring. 47% on both 2P% AND FT%!!. These guys are not shooters, and probably did not grow up practicing shooting too much, averaging only 6 PTS on 6 FGA per 100 possessions. Instead, they look like they were blessed with other gifts. Being long, athletic, tall scraping up 15 / 4 on TRB / BLK per 100 possessions. That’s no joke for efficiency, as good as the rest of the big men types in Regions 3 and 6.

While Region 8 kind of implies the players weren’t really good at any particular thing, Region 9 implies that these players exhibit elite big men qualities. We even have two HOFers in here, Mutombo and Rodman.

Any more gifted on the offensive end, however, you’d see these guys creep up into Region 6.

Great. So I got 9 regions. So what? To me, this exercise was about abstracting stats up to a level understandable from a basketball perspective. Sure, AST / STL / 3PA might be correlated, but there isn’t necessarily causation here from one to the other, but rather the human who is playing the game has the physical attributes, and has the coaching staff that put him in a situation where he is able to succeed in getting these types of numbers. If you’re not a tall guy, you probably won’t get too many rebounds (generally speaking!).

While I’ll never say “oh you have low point numbers and low big men attributes, and not that many assists, you belong in Region 7 and I will now label you as a spot up shooter”, there is a natural correlation that a spot up shooter will exhibit many of these attributes, and PCA is kind of helping us define these natural tendencies. PCA isn’t defining specific roles, or perhaps even natural correlation actually, but it is painting a story of how the game has been historically played (without necessarily any information on how the game will evolve in the future). Historically, there are stronger correlations between certain factors, and whether it’s due to some sort of natural cause or causation through coaching… etc, these relationships do exist statistically and it’s quite interesting to walk this fine line between watching a basketball game unfolding before your eyes and seeing the same story being told from a numbers perspective.

From this, I want to dive into team lineups, and that might be all I do with the basic metrics for now before diving into advanced metrics to better explore the All-Star / All-NBA / MVP / HOF race.