Okay, so I’ve gotten to explore the data set a little bit, statistically and spatially. I now want to built a model. With the model, I’m not necessarily trying to predict anything, but I almost want to use regression as a means for data exploration and data visualization as well. In the ideal world, I’d want to see a heatmap like this:

This is a heatmap of Boston showing the price per bedroom. I essentially would like to build that for units in Edmonton.

Thinking about it, gmaps has a weighted heatmap option, but gmaps’ heatmap factors in density. Sure, there is a weighted option, but you’re still taking density into account. For example, the following 2 situations would probably yield the same result:

The heatmap yields some function of density and weight (assessment value), we need to purely look at the average assessment value in a region without taking into account the density.

The first thought that came into my mind was actually xgboost… AGAIN. I’ve done 3 projects now, and all 3 have relied on xgboost haha… What a package. This is where my train of thought comes from:

When I was reading ESL, I came across this visualization which is doing exactly what I want to do here and it stuck in my mind: 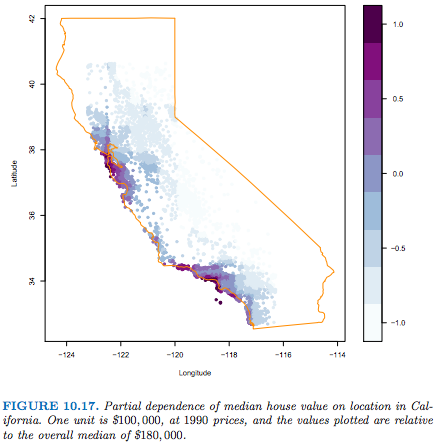 When I was reading the book, I didn’t even know I wanted to do this kind of project, but that image still stuck with me. It was one of the moments when I realized that models are so diverse in the way that they function and often times the model may yield results that you never set out to accomplish. When I was reading about gradient boosting, I was like “great, this sounds like an awesome classification technique”, but right now, not only am I working in the context of regression, but I don’t even really want to use regression as a prediction technique going forward, I actually want to use it for a data exploration / visualization technique! Yes, regression is imperative to getting to our end goal of the visualization, but I’m really not trying to feed new data into here and predicting on them (although, as the tables flip, I will have a model to do that if I want to as a bonus)!

Well… we’re no strangers to xgboost by now… let’s git it.

Okay, wow, I’m having an extremely difficult time trying to get xgboost() to work with the objective ‘reg:linear’ and GridSearchCV…

I’m going to bypass GridSearchCV for now and revisit it later when I feel up to the challenge. I have to caveat what I’m about to do with the fact that I’m going off of previous models that I’ve built to pick the parameters here. IN NO WAY IS MY PARAMETER PICKING FOR THE BELOW CODE OPTIMAL. I would definitely be trying to use GridSearchCV to find the best parameters for max_depth and learning_rate.

Ok, I feel a bit paranoid at the model because I can’t tune the parameters, so I’m just going to randomly sample some parameter mappings. Note that there is no cross validation happening here, just a single train test split. Not quite as reliable but it’s what I’m going to deal with for now.

Alright, so there’s my make-shift parameter tuning… I’m going to go with that last model:

It actually trains decently fast too, converging in just 81 iterations. If I think about this a bit more, each iteration is generating a tree with 20 splits (well, up to 20, but I’m sure it will find 20 splits that can optimize improve the training error) so we essentially have 1620 splits. We have to keep in mind that these 1620 splits are segregated into groups of 20, which are then improving upon the weaknesses of previous sets of splits, a la gradient boosting.

Awesome. Let’s test it out on some samples:

Let’s feed the average latitude and longitude of these neighbourhoods into the model and see if it returns something close to the average Assessed Value.

In some cases, the model was off by half a million, which kinda sucks. These, however, are the most expensive communities and may be quite unstable in terms of where the average latitude and longitude of the communities lies. Let’s try this for all the communities. The fact that the histogram centers at zero is a great sign though, clearly there is correlation here and it’s not just random noise.

Confirmed. This thing is doing quite alright. Most guesses are within 100K of the right valuation. I have a crazy idea that might just work in creating the heat map. The California plot above uses the partial dependency plots to generate that type of heatmap, but unfortunately to me, xgboost doesn’t have partial dependency capabilities yet.

There are two correlated facts sticking out in my head:

Why don’t I… create a grid of points across the entire city and use my model to predict the average value? Wouldn’t that essentially be showing me the type of relationships that my model is generating?

Judging by Google Maps, Edmonton is about:

What if we created a grid of 100 x 100 points throughout the city to predict and plot on? Let’s try it out:

Now I want the value to represent the intensity of the color on the heat map, right? This is extremely disproportional as that \$20M house will blow all the other houses out of the water in terms of color intensity. Let’s try taking a log scale.

This looks great. Getting rid of the outliers, although the lower half of this Gaussian is a bit misleading… I just have to remember that this is on a log scale.

First things first. The annoying thing about taking a grid sample and making predictions off that grid is that it’s not dynamic to map zooms unfortunately… If you zoom in once from the default map, you should be able to see the heatmap the way I intended lol. For jupyer and web purposes, the intended heatmap is below:

Alright, so what do we have here… I have to remember that this is a log scale, so the really red areas are actually worth more than what their intensity seems to be. My objective here, however, is not to get into all the numbers. It’s simply to get an overall perspective on where the “hot spots” are in terms of property value. To no surprise, Edmonton SW seems like a clear winner, with other areas of the city showing pockets of value as well.

I’d say our gradient boosting model produced something that at least makes sense. I’m not in real estate and I’m not too well-travelled even in my home city, so I can’t quite comment on certain areas of the map, but the southside looks pretty accurate to me.

Another thing I’m noticing is that there’s a big glaring green hole in downtown. This is based on the fact that each condo unit is being compared against each house, which obviously is not a fair comparison. I haven’t done any splitting of the data to ensure that houses are compared against houses and condos are compared against condos. Downtown, a dense area of condos, will obviously have a lower value per unit than the suburbs of Edmonton. Maybe a modification for later!

For now, though, I want to try another model really quick. Let’s see if KNN gives us a similar result!