Alright, we’re running out of classifiers for us to try here. We’ve already gotten some pretty decent results thus far. My personal favourite has probably been just a single decision tree or the random forest. The interpretability of those models are pretty cool. LDA and QDA are also pretty neat because of their simplicity, but the accuracy of the trees has literally been the best so far.

I’m going to move on to Neural Networks in this post. I know for a fact that NN is overkill here because of

but there’s so much buzz around NNs… how can I resist!

At the end of the day, an NN is basically just a linear sum of sigmoid functions… I think that’s literally it! Through all the mess of the nodes, optimizing actually becomes quite easy because of the chain rule in calculus and leveraging gradient descent. Love it how something seemingly so complicated just ends up being so simple. So simple we can’t even interpret the results… har har har……………

Anyways, this video was a lifesaver for understanding NN’s (as well as ESL):

It is really able to visually break down how an NN is constructed. To give a super quick rundown on an NN, we’ll start off with what one even looks like:

Yeah… pretty bad joke eh? I was on the fence. I think I’m getting way too deep into the modelling right now and I’m just barely trying on the jokes anymore. Oh well, I guess it’s probably better this way than vice versa. 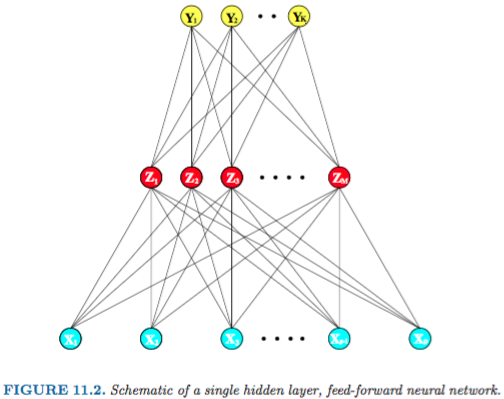 If the last paragraph didn’t make sense, it likely will by the end of this introduction. 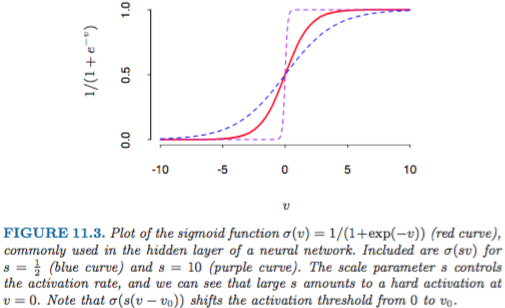 This function is nice. It’s simple, it gets most of the job done, but it doesn’t get the entire job done. We’ve misclassified one blue point and one red point. If we bend our step function a bit, we can get the following model:

Here, we’re getting all the points. Does it overfit? That really depends on test data, but for the purposes of the training data, we’re happy we’ve even found a function at all that can get 100% accuracy on the training data. How do we make this function??

Well, we can do so by actually simply combining multiple step functions! If they are shifted and weighted with a magnitude, we can use an infinite amount (or a large amount) to build whatever model we want!

We can see that this is basically what the neural net is doing. It’s trying to find some possible way of building the optimal function based on the shifts and weights of its nodes:

How do we perform this optimization? We essentially take a look at the last output and simply take the derivative to see if we can gradient descent to a local optimum (yeah, we could get stuck in local optimas here…). This may seem like a pretty crazy derivative to take… we have so many factors that affect our output and we basically have to take the partial derivates of our final output with respect to all these parameters, but the chain rule actually allows these calculations to be somewhat scalable, at least to the point that the calculations scale linearly and a computer is able to handle it. More information can be found in the video as I won’t go into the heavy math here.

Let’s try one out!

First, we actually scale our inputs. The reasoning for this is apparently not much to do with the functionality of the model itself (as nodes can be reweighted accordingly to the scale that the inputs are on), but it actually helps make the process more efficient and apparently helps avoid getting stuck in a local optima.

That neural net took… 5 minutes to train!!! I thought I was being cute with just one hidden layer with two nodes, but apparently that still takes 5 minutes. In the console, I could see the output from the ‘lifesign’ parameter, which simply gives us a verbose update. The output did say the neural net was working towards a 0.01 error threshold on the partial derivatives… I’ll have to review what exactly this threshold is but that’s definitely a place to start if I ever wanted to lower the training time!

Let’s take a look at the ROC curve from this model.

Wow, there we go, I don’t know if we really need anything more here! I’m getting the same AUC as the decision tree I built before, and let’s take a look at the best sens / spec metrics:

One characteristic of neural nets is that we essentially start with random weights. The randomization of weights may cause us to live in a local maxima, or depending on how we stop our neural network (maximum # of iterations? error threshold?), we can actually end up with different results per neural network.

The neuralnet library has a rep function which allows us to train multiple nets with random starting weights to see if any of them do better than the others.

Grr, getting R to output in python via rpy2 is pretty annoying… For now, I’m just going to post the output of the neural network model above:

All the errors are more or less the same, and in fact it’s quite close to what it was even for the 0.01 threshold as well! In this case, I don’t think it really matters which model I take necessarily… Let’s just take the first model.

Pretty solid. I wonder if having more hidden layers would do any better?

Here, we see that our model definitely took longer to train (and also quite inconsistent actually ranging from 3-6 mins), but the error remains about the same it was before… Let’s check the AUC real quick of th ebest model (model #2):

Same thing! Doesn’t look like we need the complexity of 2 hidden nodes especially with the 6x training time. Probably even 1 hidden layer node is good!

I’ll spare the entire output, but we’re getting around 798 error, higher than before!

We lost about 0.0001 on our AUC, in other words, we really really don’t care. I can see how people get deep into NN’s now… just picking what’s in the hidden layers is an interesting exercise in itself, and for something like image detection, I feel like we could spend… what… days on end just tweaking that one parameter.

I would try to perform CV, but I might have to wait overnight before I kick off that script… At the fastest we were running at around 1.5 mins per model to train. If we’re performing let’s say even 5 fold CV and turning the repetition off on the NN and trying 1-5 hidden layer nodes, we’re still looking at

Alright that’s not HORRIBLE, but it is pretty annoying considering we can grow a tree in like 0.0000000000000001 seconds and get pretty much the same result lol.

I don’t even think the neuralnet package has a built in cross validation tuning function like the svm package did. I’ll just leave this for now, but again, great predictive accuracy.