I’m pretty happy with our models and predictions. I can say that while I was making those 10 posts about those 10 different models, I really started to question my objectives, and life in general and why I was even doing what I was doing. I was so far removed from any tangible predictions and was just caught up in AUC, and sensitivity / specificity metrics. Never once did I actually try to predict it on a test data set until the last post. Again, super happy to see that the results were on the right track.

Throughout that whole journey, though, I had one thing (among others) in the back of my mind: Feature selection. Even though the model is performing relatively well, I couldn’t help but think that we were using only two features. At the end of the day, I basically hand-picked these two because I knew they were all-encapsulating metrics. Since WS and VORP are based upon your overall “contribution” to the team, they take into account PTS, REB, AST… etc intrinsically. This is nice and all, but we are really just guessing that WS and VORP have the most to do with all-NBA status… We didn’t even try to quantify any other metric. Since we’re trying to find the best model, I can’t tell you for sure that PTS isn’t an important factor because I never really tried to find out! I just went with my intuition. Even now, I’m pretty happy with the model in general, but I can’t say that it can’t be better because I started with 2 features and stuck with my guns the whole time.

If we extend our scope of finding the best model, I think any activities with some rhyme or reason will be able to be modeled in the future state of our world. Even if we take a really simple act like whether or not someone will pass the ball, you could probably theoretically generate a model with super detailed features like where their eyes are looking, the angle of their elbows at the time, the way they are holding the ball, the placement of their defender, the placement of the defender on their teammate they are passing to… etc we could go on forever right? If you could get down to like a millimeter measurement of every aspect of everything on the floor ever, you could probably predict what anyone will do at any given time. So back to my WS and VORP example, I know the model can be better for sure, but it’s just a matter of finding which features matter the most, and in this data set specifically, we don’t quite have too in-depth measurements. Having said that, though, bball-ref still has one of the richest datasets out there, and there is still a lot to parse through for someone like me who is just getting acquainted with many of these metrics.

At one point in the beginning, I found myself thinking “man, there are a ton of metrics here… I’d better do my research to get some context on what each of these mean and whether they intuitively sway an all-NBA vote or not”. That’s why I took a deeper dive into WS and VORP right? Because I wanted to understand what the hell was actually going on there. Going through the trees chapter in ESL and using the tree-based methods (single decision trees, random forests, gradient boosted trees), it’s clear that, if I have a regression or classification objective, a tree-based method would actually be able to shoulder some of this feature selection responsibility for me.

Feature selection is an interesting thing. Many models can actually do it, and even logistic regression intrinsically is performing feature selection because we’re assigning a coefficient that’s literally saying “hey, this is the quantitative amount in which this feature affects the log-odds of the output being this class”. We saw the effects of multicollinearity in post #22 about logistic regression, so have to go through an extra step of calculating the VIF if we want our model to work properly (which goes hand in hand with feature selection). Trees on the other hand, don’t have this problem, and in fact if we look back to post #23, we list a bunch of advantages that trees have over pretty much every other model:

And from what we saw before, it seemed pretty cool that we could just output feature importances and that this was an intrinsic characteristic of ensemble learning, where we can be more confident that the results were constructed from a methodology that exerts low variance characteristics as well. It’s also immune to outliers and multicollinearity because there’s no statistical regression when choosing when to make the splits, it’s simply calculating the best possible split, period. If two features are highly correlated, one of them will still yield a better split, and that one will get chosen. Theoretically, we could just throw all the original features into something like a random forest, or even a single tree, and be able to get an idea of which features matter the most for our objective (in this case, classification).

I need to stop and review because, first of all, I am by no means saying that we don’t have to do our homework up front. I’m not saying throw all your variables into a random forest, get the top 2 or 3 features, and call it a day. I’m saying what a nice and useful exploratory tool you have at your disposal for preliminary exploratory analysis! If a tree continuously decides to split on WS and VORP, then clearly there is something there for us to explore. It won’t answer the question “what makes a player all-NBA status?” but it will bring up the question “why do WS and VORP contribute so much to all-NBA production?” which will provide a stepping stone to the the ultimate objective.

Well, enough talking about it. Let’s try it! I’ll put in a few more features and throw them into a decision tree, random forest, and GBM to see what the feature importance plots give us.

I know we’re performing feature selection here, but I just want to take a look at the data really quick and ensure there are no features that make no sense in the data set. For example, from the features above, I’d obviously want to remove _season_start_year as the season has no correlation whatsoever with whether a player is picked. perGameStats_Pos_ will probably be removed as well because we understand the correlation here (every year has G / G / F / F / C) and it’s not something we’re looking for to explain all-NBA status.

Alright, let’s drop games started and 3P% because I’m just looking for a lazy way to get out of this and we already have so many features anyways.

Okay, lol, who knows how this will work out, but let’s give it a go with the decision tree. Here, I’ll literally throw every feature above into the model and measure on _accolades_all_nba_.

Some observations in no particular order:

Let’s move on to random forests.

Remember, for random forests, we can’t quite see each tree as easily (and there will be hundreds or thousands of them so looking at 1 tree may not be too useful anyways). We do have the variable importance feature though as well as the out of bag errors to help us understand the data. 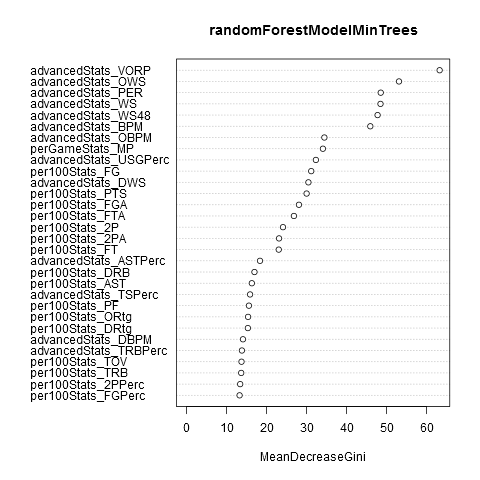 Okay, sorry, that’s a lot of info to take in. While nothing is new and I literally just rehashed everything we did in post #24, I probably was a bit trigger happy with all the charts and graphs.

Let’s see what GBM gives us.

Well, that’s pretty nuts. It seems that anything over 350 will just continue to stay the same, so let’s just go with 350 trees as our benchmark as to not overfit 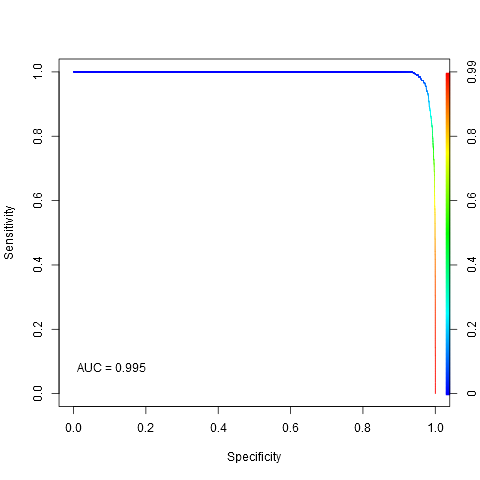 Well, this is just stupid. I’m not quite sure how to take this, but ok. 99% / 95% with an AUC of 0.995 these are basically fictional numbers at this point… I know gradient boosted trees are good, but I’m honestly a bit skeptical that it’s doing this well.

More importantly, let’s look at the feature importance plot. Whaddya know… WS is back on top and VORP is way down there! This is telling me that, in the presence of one, the other is a bit redundant. We see PER creep up again and, while there is always the narrative that stats don’t necessarily matter (which is true by the dominance of WS and VORP), it kind of does matter because PER is purely a stat based on other stats, period. Perhaps it provides an orthogonal / uncorrelated perspective to augment what VORP and WS are giving us… interesting stuff.

I’m actually curious to see how this model would do in our train / test split… Let’s try it.

Okay, the model actually selects 35 nba all-stars here… Not quite what we want as it’s obviously 100% in its predictions but it’s misclassifying a good 20 guys. Maybe we can tweak the threshold of what we consider all-NBA in the GBM’s probability results to see if we can bring the number of players classified down to 15 or so. 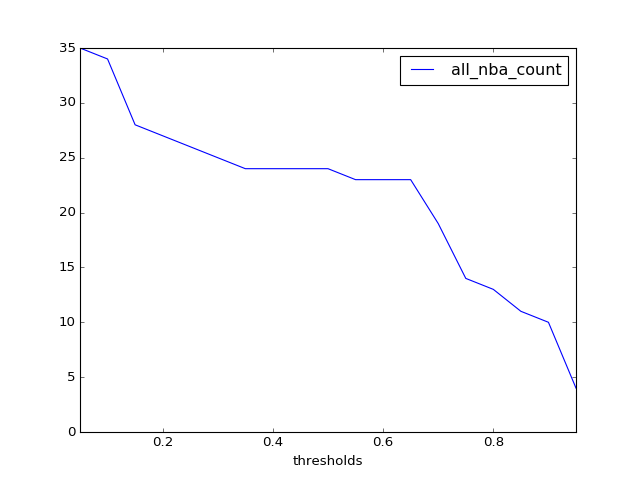 We see here that we get 15 players, but they are not distributed as they should be in terms of the number of G / F / C’s. I’m going to ease up on the threshold a bit to get like 20-25 players, then I will build the team.

The team ends up being:

Wow the boosted tree itself with all the features got 13 / 15 players!!! KAT was seen as a major snub, and we already went through some of the Draymond logic for the last post so that’s actually quite impressive!! It almost got the first team completely correct as well except for Rudy (who was a TINY TINY margin away from first team anyways)

This one seemed to differentiate between John Wall and DeMar as well… Not quite sure how because we’ve muddled the model quite a bit with the additional features, but wow there you go, you can’t argue with the predictive power there!

Let’s check out the feature importance, I assume it’s the same as before.

Well… that is quite weird actually. This is completely different from last time. While WS is still important, it’s DWS and DRtg that are playing the major roles this time. MP is still there, but VORP is actually nowhere to be seen… Not really sure what to make of this because I thought boosted trees would be relatively consistent every time.

Somehow the taking out of 2016-2017 data actually changed the model A LOT… That’s REALLY weird as I didn’t think 2016-2017 made that big of a difference. This new model clearly values defensive stats specifically a lot more than any others, although DWS is still a variation of WS on top. PER is basically nowhere to be seen now as it’s probably being masked by another metric. This is where PCA would actually help us out a bit as clearly some of these are correlated.

I guess we see that, while trees are not immune to multicollinearity in the sense that the model becomes unstable or loses predictive power, it is a bit vulnerable in terms of interpretability.

Lastly… How about Paul George tho…