Distributed computing is the idea of distributing your computing over multiple capable workers. At the very basic level, if you’re moving houses and you need to move all your furniture, you’ll be able to move it much faster with 2 buddies than by yourself. In computing, the baseline premise is the same. I would be stupid to ignore the details behind the concept, but my brain is dumb so I’ll take baby steps at a time.

If I think about my friends helping me move (which I have absolutely done before), it is obviously faster – Obviously! 3 bodies is better than 1! However, it’s not without its complications either. Here’s a few things that I’ve come across personally:

My point here being the more people you have, the more complicated it now gets to actually organize or efficiently utilize all the resources. Sometimes it’s not that much more to think about, other times I wish I’d just straight up done it all myself. In the distributed computing world, we see not necessarily the same complications, but we see the same concept of trade-off.

If we have 1 computer, we have let’s say 2 cores, 4GB RAM, maybe 200GB of disk space etc. If we have 3 of those, we now have, in aggregate, 6 cores, 12GB RAM, and 600 GB of disk space. I know, I know, we literally just spun up a machine with 4 CPUs, a GPU, and 61GB RAM and that’s probably good enough for most applications involving a dataset under 2GB like I’m doing in this project, but I’m purposely trying to dive into distributed computing here in a controlled way haha. Anyways, yes, we get the aggregate firepower of all 3 computers, but here comes the trade-off!

Although, to no surprise, I’m no expert on distributed computing (we can get into some really complicated consensus algorithms), but I wanted to give some context around why EMR is even a service. Why do we actually need to give a name to what essentially comes down to 3 EC2s? The answer lies in the software that sits on top of these EC2s that have answers to all the problems we just stated. I wish I knew the nuts and bolds, but unfortunately I just don’t have the time nor brainpower to do that! Maybe something to stick on the to-do list.

Let’s say we have 6 numbers

and we want to find its sum. Obviously we can do a bit of foreshadowing… the answer is 21.

Not very difficult to do on one machine, but let’s complicate our lives an unnecessary amount and try to compute this over 3 machines. This isn’t to difficult either luckily – We’d probably just distribute the data among the 3 machines evenly (this is coordinated by a master node which can be randomly designed as any of the 4):

Each machine does an addition of their own data (traditionally called the map step of map-reduce and they get the following results:

Each machine would then send it back to the master node, let’s say machine #1 in this case, and machine #1 would calculate the final sum (traditionally called the reduce step of the map-reduce framework):

The master node would then return the final result to the users. Let’s look at another example.

Let’s say we have the same 6 numbers

and we want to find the average this time. We can probably distribute the data in the same way, but how exactly do we calculate the average?

Then the master calculates the final answer

A bit harder, but we got through it!

This one’s even easier. Let’s just add the number 5 Ao all numbers and store that as another result, maybe in another column of the dataframe that contains our original data. We don’t even have a proverbial “reduce” step here. If we were doing this type of calculation with a single processor, the simplest way to do that is to just go line by line, perform the addition, store the result, and go to the next line. Something like this:

After storing the results, we’re done!

, we should come out with

Let’s start out the same way with the data distributed evenly amongst the 3 machines.

Hmm… How does machine 2 calculate

? It has the number

We see the types of coordination and organization that the different nodes have to go through to perform to perform more complex functions like standard deviations or joins with other data sets!

Alright. EMR. What is EMR? First of all, EMR stands for Elastic Map Reduce. Elastic means the architecture is flexible and scalable – we can add and remove nodes on the fly and it’ll integrate (hopefully seamlessly) into the family. Map Reduce we’ve covered a bit, refers to one of the original mainstream distributed computing frameworks. It’s more or less obsolete now so I won’t go into it any more than I already have with the examples.

Hadoop is a suite of tools that deliver a tangible distributed computing architecture to a user. Some of the main components of Hadoop are:

Hadoop has way more modules, but these are the only 3 that may relate to Spark for the scope of my project, so I’ll stop here and dive a bit more into HDFS to make the distributed concept a bit more tangible.

HDFS stands for Hadoop Distributed File System. What happens when I store a file on my Macbook? Let’s pretend we’re downloading a file from the internet…

Now… how does this change when we want to store files in a distributed manner? In our examples above when we had the simple array

, we stored 2 array elements per node. There are a few problems with this, though:

This is where HDFS steps in. HDFS is designed for robustness and scalability. Replication is one the mechanisms in which HDFS provides solutions to these problems. By default, HDFS replicates each file by a factor of 3. Or, more specifically, each file is broken down into blocks, and each block is replicated by a factor of 3: 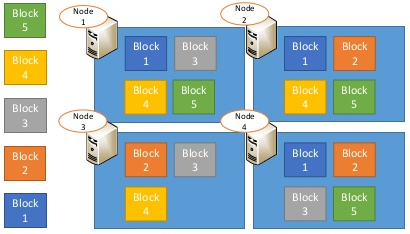 Notice here that, with 4 nodes and a replication factor of 3, any one node can go down and we would still have all the blocks required to recreate the file. In fact, any two can go down and we’d still be good. This would change with the scale of your cluster and the number of nodes you spin up, but you get the idea. HDFS also performs this replication and distribution of blocks based on available resources as well, namely hard drive space. From the HDFS architecture guide:

The HDFS architecture is compatible with data rebalancing schemes. A scheme might automatically move data from one DataNode to another if the free space on a DataNode falls below a certain threshold.

Once again, another domain that I’m nowhere near an expert on, or even knowledgeable about, so I will leave it at that for now.

Hadoop generally includes Hue, a web-based HDFS file browser that provides a simple user interface that we can use to avoid getting caught up in all of HDFS’ details. Hue looks something like this:

YARN is, well annoyingly it’s yet another resource manager *eyeroll*…

I’m sorry… how could I resist? ANYWAYS… YEAH… YARN = Yet Another Resource Manager. I suspect this means that there were other resource managers before this one in the world of distributed computing. For the 8000th time, I’m no expert in any of this, YARN is really the first one that I’m working with (and even then, it will all work in the background, transparent to me), but I think it’s worth me at least exploring so I can understand the inner workings in hopes that it will help me design and debug when the time comes!

YARN is the protocol that the nodes communicate using to determine which machines will do what. Remember in our examples, we had our map phases and reduce phases. I found this article from the folks over at Cloudera extremely helpful because it was written for folks like me with half a brain (just kidding, just people with less experience in distributed computing). I’ll be using some of their illustrations in this section.

A “cluster” in hadoop indicates machines who are working together as one distributed computing platform. There exists 1 master node, and however many worker nodes the user wants (depending on the task at hand).

In this example, we have

nodes, each with their own processing and RAM. YARN utilizes a Resource Manager daemon and

Node Manager daemons to logically make up this Hadoop “cluster”.

In the example above, we have 100 worker nodes each with 64 cores and 128GB RAM each, making a cluster with

Various hadoop configuration parameters and the current workload of the nodes will help guide the master node in determining how much resources to ask for from the cluster of workers. If there is only one worker node, or if only one worker is available, the cluster will operate in a design like this:

The Node Manager daemon on the worker node spawns a logical container with the worker process running within it (could be a map or reduce job here). If more nodes are summoned or become available, the Resource Manager will continue to spawn workers until the optimal number is reached.

Here, the another worker is spawned and the master understands that it has an aggregate of 2 workers, 120 CPU cores and 180GB of RAM. As workers finish their tasks, their Node Manager daemon terminates and, as all the workers finish their tasks, the Resource Manager daemon terminates, but not before the result is presented back to the requesting client.

Right off the bat, I don’t know enough about HIVE and haven’t used HIVE enough to really comment on its inner workings, but it’s basically a distributed relational database. We saw, with HDFS, that just storing a single files or doing a simple sum takes quite a bit of organization and communication. You extend this out to all the functionalities that make a relational database work… indexes… table metadata… transformation of SQL joins and group bys into a distributed framework… I’ll need quite a bit more education before I really start to understand how HIVE is built.

Just wanted to mention it though, because Spark can pull data from HDFS or HIVE directly!

Anyways, that’s probably enough for this post. I think I’ll try to spin a cluster up in the next post.